On Thursday 11th May 2017, HSF held its Annual General Meeting at the Guildhall in London.

The guest speaker this year was Stuart Pearce MBE, former international footballer and manager, who gave a very humorous and also insightful and reflective talk.  Stuart was representing the John Hartson Foundation and was presented with a grant for £20,000 for that charity. The John Hartson Foundation was founded by John after his successful battle with testicular cancer and the charity works to raise awareness of the disease.

Paul Jackson reported on another successful year for HSF and said that one indicator of this success over recent years has been the increase in the amount donated by the Charity. It was a little over 10 years ago that HSF donated just £50,000 to medical charities and individuals in need. Paul was delighted to inform the meeting that for the first time, the charity will be able to donate an incredible £1 million pounds to good causes in 2017.

In 2016, HSF’s Grant Making Committee authorised donations of £900k to 280 charities in the UK and Ireland and made 90 individual grants and over 30% of these donations was paid to 112 Irish charities. HSF is very active in Ireland, where we are the largest and most successful Health Plan provider, and everyone connected with HSF is proud of the wonderful work HSF carries out in Ireland.

So far this year, we have donated £280,000 to over a 100 medical charities. This figure includes £85,000, which was granted to 30 charities at a reception in Glasgow in February. Bailie Marie Garrity and John MacLeod, Lord Dean of Guild presented the cheques. It was a fantastic event and our guest speaker, Ewan Hastings, spoke with great warmth about our organisation and the difference it is making to peoples’ lives.

The Charities HSF supports can be involved with anything from research to palliative care. Paul commented that both he and John Greenwood were very fortunate to visit a number of these charities every year and both cannot help but be impressed by the amazing people they meet and who are often living in the most difficult of circumstances. These organisations are very grateful for HSF’s donations, however large or small, and none of these good works could be achieved without the hard work and dedication of all those involved with HSF, our Trustees, our staff and our Association Members.

Paul gave a special thank you to two Association Members, Pam Boyle and Jill Walton, who had recently stepped down from the Grant-Making Committee. Their combined length of service on the Committee was an incredible 21 years!

Paul also made one more special thank you, to Jane Allen, who was retiring at the end of May. Jane has been Paul’s PA for the last 6 years and her support has been invaluable. 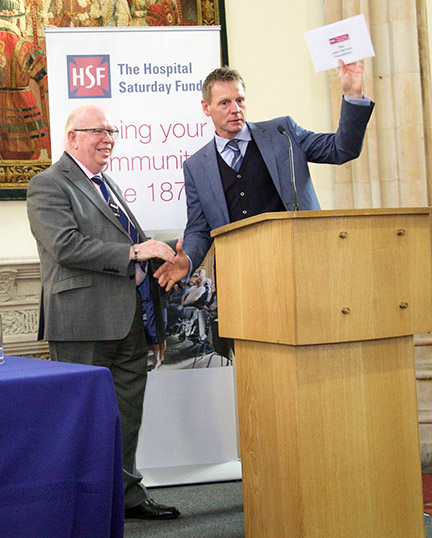